Trust me, I know a shortcut

One of the greatest digital innovations of recent times is the SatNav.  When Satellite Navigation was first introduced to the motoring public, it was a custom device, with a custom map downloaded to it.  This handy device allowed you to plan your route to a fixed set of destinations with turn-by-turn instructions to get you there safely.  The biggest impact it had in the early days was that no longer did you have to argue with your passenger when you got lost; you could now argue with a machine instead.

Yet it is the digital age where SatNav’s have been taken to another level.  The accessibility of the smartphone and communications networks gave it a platform; driven by the data economy it discovered an entirely new business model.  Whereas once a new road or change in layout would’ve required you to wait for the next annual map pack; and a traffic jam would’ve been something to drive into – using real-time data from the users of SatNav your arrival time is based on current information, constantly updated along your journey, to get you there as expediently as possible.

Whilst the opportunities to show that man still better than machine have dwindled – currently, even the best SatNav in the world is no match for a little local knowledge, mixed with eyes on the ground and the ability to push the boundary of the highway code right to the edge.  If there are five cars ahead at the lights, the SatNav still doesn’t know to take a left, do a u-turn at the next junction and hop across number 38’s flower bed; a route that doesn’t exist on any map.

Where this becomes an issue is when you’re the passenger rather than the driver.  There are two things that erode trust.  The first is when the car starts taking on water because the river on your shortcut was deeper than expected.  The second is when the arrival time goes up.  And it seems that once you’ve eroded that trust it doesn’t matter how excited you become that you can save 26 seconds on the journey time – the SatNav’s instruction becomes more credible than your own. 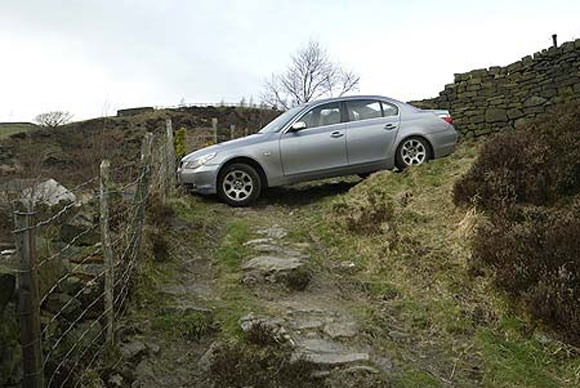 In the world of identity, this erosion of trust is often expensive, and sometimes fatal to a scheme.  The Estonian Government are busy re-issuing their identity cards after a theoretical security flaw was found.  Fortunately, they acted swiftly to restrict access to services.  One benefit that Estonia have with their identity scheme is that it is mandatory; so whilst a costly and embarrassing episode for them – the inconvenience to the customer is unlikely to lead to a public revolt against their much vaunted service.

Estonia have always had an enviable position when it comes to digital government, and how they have designed and implemented their digital identity scheme to support it.  Being able design services and architecture from the ground upwards, and mandating some of the more awkward parts of the identity solution (physical step out for example) upon the population have helped them to grow adoption at a rapid pace.  In other countries, how services are accessed comes with choice, and digital identity is optional rather than mandated.  These countries have to create compelling reasons for their citizens to engage with digital government.

Similar considerations exist in the private sector – the sweet spot of security, user experience and cost needs to be hit.  If you don’t hit this you won’t create a service that users want to engage with.  Digital identity is hard.  How we can reliably identify customers in the digital era when identity is based on legacy physical constructs is always going to grate against customer experience.  The data, systems and services that we need to leverage are going to be costly.

It may be tempting to take shortcuts on security in order to minimize costs and maximize customer experience though we have to consider how easily trust can be eroded when we get it wrong.  Customers understand that checks and hurdles are intended to keep them safe, and they expect them.  Though they don’t expect to be put through the mill for access to a service that doesn’t warrant it.

Identity fraud is a growing problem, whether in the context as a citizen of a government, or a customer of a private sector organisation.  We shouldn’t take shortcuts on identity unless we’re confident that the outcome is going to be better than following the route our more conservative security conscience us tells us that we should.  If your digital identity experience seems too easy, the chances are that you’ve taken shortcuts in either cost or security.  It may work for you in the short term, though eventually you’ll run out of luck.  The challenge is how to avoid being the one flapping their arms wildly because you know a shortcut – and realising why everyone else is ignoring you.


Read my other posts
The rise of synthetic identity - Fraudsters are playing the long game, we need to think ahead
Just in Case - From early adoption to maturity
I have control - Can we truly own our identity
Tipping the balance - Getting the right balance between security and user experience
You don't know what you're doing - Poor security practices are putting users at risk
I didn't say you could touch me - Biometric authentication and identity
You don't need to tell me - Impacts of the EU General Data Protection Regulations
Coming together on being alone - The need for a clear government digital strategy
I'm not the person I used to be - Authentication for real world identities
Distributed Identity has no clothes - Will distributed ledger technology solve identity
Bring Your Own Downfall - Why we should embrace federated identity
Unblocking Digital Identity - Identity on the Blockchain as the next big thing
Tick to Agree - Doing the right thing with customer's data
The Kids Are All Right - Convenient authentication: the minimum standard for the younger generation
The ridiculous mouse - Why identity assurance must be a rewarding experience for users
Big Brother's Protection - How Big Brother can protect our privacy
I don't know who I am anymore - How to prove your identity online
Three Little Words - What it means for your business to be agile
Defining the Business Analyst - Better job descriptions for Business Analysis
Unexpected Customer Behaviour -  The role of self-service in your customer service strategy
Rip it up and start again - The successful Business Transformation
Too Big To Fail - Keeping the heart of your business alive
The upstarts at the startups - How startups are changing big business
One Small Step - The practice of greatness
In pursuit of mediocrity